Pattern for the Pescovegetarian Mittens 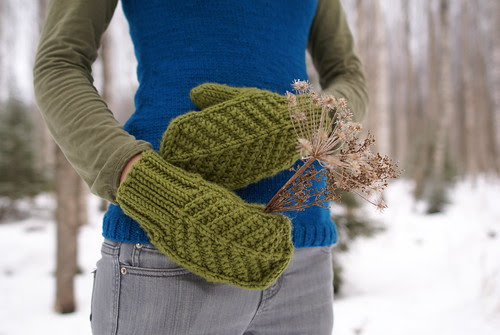 Note: the mittens are knitted in the round using four dpns. The stitch pattern comes from Lesley Stanfield's book The New Knitting Stitch Library and has been modified for knitting in the round.

Right hand mitten: Using smaller dpns, loosely cast on 30 sts and divide them on 3 needles - 15-7-8-sts a needle. The sts on the first needle will form the back of the hand and those on the 2nd and 3rd needles will become the palm.

Keep working the 13 middle stitches of needle 1 according to the chart and the rem sts in St st until the mitten almost reaches the tip of your forefinger, ending with chart rnd 4.

Pick up the 6 sts you left waiting on the scrap yarn and place them on one needle. Pick up 6 more sts above and around the thumb hole and divide them on 2 needles, 3 sts on each. Keep knitting these 12 sts in the round until your thumb is nearly covered. In next rnd, *ssk, k2, k2tog* twice and after that, *ssk, k2tog* twice. Drag yarn through rem 4 sts and pull tight. Left hand mitten: work just like the right hand one, just make the thumb gusset in the end of 3rd round, 1 st from the end of rnd. In the end, weave in yarn ends and report your mittens here!

If you find any unlogical stuff or errors in the patterns, please inform me. I'm happy to answer questions. Also any sort of feedback would be great, because this was my first time writing a pattern and it was a totally new and stirring experience :P

I want to be cold ... to knit your mitten

Moi! I stumbled upon one typo: for the decreases, it should be "Always make a ssk decrease in the beg of 2nd needle and a k2tog decrease in the end of 3rd needle", shouldn't it? The pattern is really great! I enjoy knitting these a lot. Kiitos paljon! :)

Thank you for a wonderful pattern. I started, and finished, my mittens today and want to cast on for many, many more pairs.

I just came across your pattern on Ravelry when I was searching for a bulky weight mitt to knit for Christmas. I just finished the first one and it worked up so fast and looks so pretty. Thanks for sharing.

love the design, and mittens in bulky yarn are the cosiest of them all! thank you so much for sharing this pattern so generously!

lots of love from sweden <3

p.s oulu is one of my most favourite cities in the world! it isn't far from where i live, and i hope to visit soon again :)

So all round it is possible to go from two.

But, I do know the methods essential to build a physique
builder-like physique.

While some cost-free body weight workout routines could be executed in the way in which the
resulting resistance curve additional closely approximates the energy curve from the included muscles, best congruence is tough,
if not impossible to attain.

Have a look at my web blog :: related resource site

Does the Bowflex truly function in twenty minutes per day figuring out only three days for each week because they promote?

Very last but not the very least, seeing that I do know
you will be adhering to the diet plan, you
will need a number of factors while in the kitchen.

Have a look at my weblog; adjustable dumbbell set

For the end of your exercise even while it's possible you'll really feel exhausted,
it is possible to usually get rest and appear back
to fold the treadmill off for future use.

So deciding whether you need to take a position inside a residence health and fitness
center isn't a very clear reduce response.

There's also a developing amount of companies which have been unmasked as frauds.

Feel free to surf to my homepage dumbbells for sale

I didn't notice any guide for your pattern! Are the x's meant to be purl stitches and the plain knit stitches?

My name is Catherine. I love the pattern so so much! I actually sent you a message on ravelry a little earlier today, but it looks like you haven't been on there in a while. I was hoping this might be a better way to get a hold of you? But if you would please read the message I sent on ravelry I would so greatly appreciate it!